Can you build a business in a weekend?  Can you take an idea, validate it through customer research and launch it to market in forty-eight hours?  Can you pivot in the process- realise that your proposition isn’t as compelling as you thought to your target market and either fail fast or change direction and build something even better?

Eric Reis has written about Lean Startup Machine in a blog that suggests you can.

Inspired, I travelled to NYC over the weekend to experience what Lean Startup machine is all about. I was blown away.

The event kicked off at 6pm with networking then presentations on Lean startup and what it is all about.  Anyone who had an idea was given a minute to pitch to the group.  These were voted on and the best 12 ideas were selected.  People self selected the team they wanted to join – six per team.  The team I wanted to join had seven people, rather jet lagged I agreed to leave and move to an under-resourced team – at the time not my first choice of product to start up, but oh what fun it was to be.

First step was to document our hypothesis and assumptions. Our hypothesis was that men and woman who are active daters have problems with remembering / keeping track of their dates.  The customer value proposition was essentially a dating CRM system.  So I’m happily married so not the most obvious of product choices for me, but this is what the weekend was all about; coming up with a proposition and challenging it.  With a clear hypothesis, at midnight we hit the streets of New York to test it on our target market.  Interviewing people in the lines outside clubs and on the streets around we sought to understand whether there is in fact a problem.  We assumed that people date many partners at the same time and that they would be open to a system to help them manage their relationships.  Our hypothesis was partly proven, there’s clearly problem that is felt more by men than women.  Any solution would be targeted at men.   There are workarounds that men use, for example using fields in their phone address book to capture data such as place met, key features.  And the more ‘advanced’ parallel dater does indeed have a “little black book”.

To back up the qualitative data we built a surveymonkey questionnaire.  This would further validate the concept and capture insights into what data parallel daters need to remember their dates.  To drive traffic to the survey we planned on using Amazon Mechanical Turk to place ads on Craigslist personals through the night.  Unfortunately on Saturday morning both services had rejected us so the survey didn’t get as many responses as we’d have liked.

Our first Minimum Viable Product was a landing page using unbounce. A little more than twelve hours after the initial concept being pitched we had a product, live in the market.  BeBop was born (another variant was datingCRM was also launched to test the URLs and the effectiveness of the calls to action). 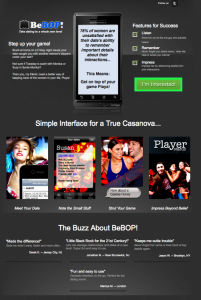 At this stage the product was a landing page and a call to action “I’m interested”.  Clicking on that took the user to a form that included an email capture address and an option to sign up to the free version and to be notified of the paid-for ‘pro’ version when it comes available.  This way we could judge if the idea would easily generate revenue.  (All the people who completed the form indicated an interest in the $5 a month version).  The idea was to drive traffic to the landing page using Google adwords, but google didn’t like us and this was denied as well.

With our learnings from the previous evening’s customer research we did some design thinking.  The team sketched up ideas of how we could solve the problem.  This exercise was repeated six times – people are precious of their first design, by the sixth they are clutching at straws and this is when left-field ideas can brew up.  And it did.  Why did the product have to be an application?  We’d seen some non-smart phones the night before; an iPhone on Android app would be of little utility to some of target market.  What about an SMS texting service.

The afternoon was spent building a texting service based upon the Twillio platform.  Customers could text their name to a number and they were signed up.  All they they need do is text the contact details of their date to the service and it would be stored.  They could retrieve it by sending a message “info: name” to get that contact texted back to them.  We included some gamification to encourage usage. 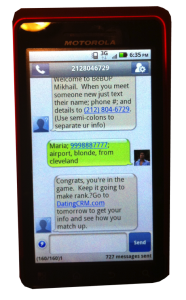 Saturday night and we hit the clubs and bars again.  This time putting the concept into the hands of potential customers as well as handing out cards with the telephone number.  More customer research.  More often than not our target market was with women, so it was hard to gauge interest.  One guy pretended to throw away the card when the girl he was with expressed shock at the concept – with a slight of hand he tucked it into his shirt pocket as he brought his hand back.

Sunday morning and we reviewed the results.  Some vanity metrics – 150 cards handed out, around 50 meaningful conversations with more customer validation, 15 sign-ups and 7 messages sent.  Was this success?  Hard to tell.  We’d also built a basic MVP android app that we launched Sunday morning and the next step is to test this MVP with customers (the issue we had is that our target market is best found at night so customer testing in the daytime would be hard).  We talked about pivoting again and exploring taking the product to a wider market – do people with non-smart phones have problems managing richer contact details other than just a name and number?  One girl who’d seen the datingCRM product said that she’d use it for that.  But by now time had run out to test this new idea.

Three thirty on Sunday afternoon and each team had six minutes to present with three minutes of questions.  We were first.  It went well.  But how did we do?  We came third overall and joint best MVP.  But it wasn’t the competition it was about, it was more the experience.  It was a real privilege to work with such talented and smart people.  David Young-Chan Kay, Yan Tsirklin, James Washington and Mikhail A. Naumov were an awesome team to work with.  More than that, the whole NYC startup movement is infectious and inspiring.

It didn’t end with our presentation.  There were some other, awesome startups with even better stories that were hatched over the weekend.

One team started with a hypothesis around supporting people hook up with mentors to help them choose the right career path when they were starting out or unsure of the path they are on.  The concept bombed with both the target market and mentors.  In an hour of desperation they realised there was a common theme they were hearing.  People love to bitch and moan.  And thus on Saturday night jobstipation was born, an anonymous place to vent fury and angry about your workplace.  When they presented, ideas of monetisation and tying the concept back to their original ideas were suggested. 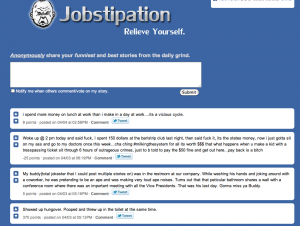 The team that won the weekend worked on the hypothesis that teachers spend a lot of time prepping classes, that they spend a lot of time searching for decent materials on the web and that they’d pay for a service that would provide them with quality teaching materials.  Research with teachers validated the assumption that teachers spend a lot of time (thirty hours a week) preparing for lessons.  But the idea that they display economically rationale behaviour was refuted.  Teachers would not pay for the service.  But their principals might.  Pivot.  The team asked the teachers for examples of lessons they have hassle preparing for – geometry was one example.  So they built an MVP that demonstrated searching for quality geometry resources.  They trawled the web to find the information and on sunday morning called the teachers again and showed them the website they’d built.  It may have been ‘smoke and mirrors’ but it worked.  The teachers loved it sufficiently to recommend the concept to their principals – the people with money who would pay for it.  All this in a weekend.