I recently presented at the AOP Forum on secrets of product success.  Twenty minutes to get through sixty two slides was fun; part of me tells me I need to slow down, be more considered and reduce the messages I want to get across.  Another part of me just says meh!

I ended the presentation with the below takeaway slide that is worth replaying here.  I believe that product owners need to start thinking more like entrepreneurs and their seedling product ideas more like start ups. 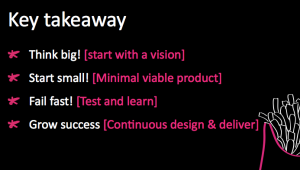 Think big: Start with a big picture, a vision, where you want to get to. This should be unconstrained thinking, divergent thinking before converging on the specifics.

Start small: Easier said than done, but this is the getting to a minimum viable product.

Fail fast: Get stuff to market quickly, test with your consumers and be ready to fail. If you fail early you fail cheaply. Realise that you have customers, users who are already passionate advocates of your brand. Take them on the journey of development with you. You not assume that everything you need to take to your customers must be polished and perfect. Don’t underestimate the positivity than can be accrued by engaging users in the development process

Grow success: Do not see the end of the project as the end of road. Getting to a first release is only the first step. Successful product owners will be engaged in a virtuous cycle of continuous design and continuous delivery. They can come up with an idea, a new feature and get it in to production in hours, or days rather than months.

OK, so it’s a guilty secret, I watch the Apprentice.

Once upon a time a TV programme would have been broadcast, it would last the hour and then be over. Newspaper comment and water-cooler discussions would follow the next day. Today the show is bigger than just the broadcast hour; it has a digital life that goes beyond the TV medium. It’s more than just a website that is hosted by the BBC. Viewers participate in the the ‘back channel’ so as you are watching the show you are not alone in your emotions. Following the Twitter hash tag provides a running commentary of how the audience is reacting. Some shows extend their reach with the fictional characters themselves engaging in the dialogue. What Twitter starts with its immediacy, Facebook continues with the audience setting up groups. And so we have Stuart Baggs on the Apprentice, a clone of David Brent, treading on twitter and now spawning dozens of Facebook groups and pages (as I write 3228 people like “Stuart Baggs from The Apprentice is a **** not a Brand”). And let’s not forget the forums and blogs where comment and discussion on the programme thrives.

The apprentice experience is more than just the it’s packaging and content. What about your product?

Anyway. So last night the final five in the Apprentice were interviewed, with Viglen’s CEO Bordan Tkachuk being one of the interviewers. He cornered Stuart Baggs about claims he runs a telco. “Stuart you’re blagging to me. I know what an ISP is. It’s an Internet Service Protocol.” An Internet what? The CEO of a company that “has developed a peerless reputation for excellence in IT innovation, delivery and service” doesn’t know what ISP stands for?!

It got worse. Later in the boardroom Sugar was grilling him about Stuart’s credentials. Smugly Tkachuk declared that Baggs “says he has a telecoms licence on the Isle of Man… What he had was just a very simple broadcom licence.”  A what? Broadcom Licence?  WTF is that?

So here we have the CEO of an IT company who doesn’t speak the most basic IT language with any fluency. My takeaway from this is, no matter who they are in an organisation, never assume that the client you are working with knows everything.  And never assume that they know what you are talking about either. Make sure you speak a common language by asking for clarity and explanation; there’s no such thing as a stupid question.  Alternatively, “Tkachuk.  You’re fired!”

Paying for media content through a pay wall seems to be a daft idea. Why pay for stuff that is free elsewhere? That’s not to say people won’t pay for content, look at the success of iTunes and app stores. (Their success is due at least in part to the ease of making payments).

We see challenge. For consumers there’s just too much noise in the Digital Landscape. It’s random, raw, repetitive. And for content providers, in this Digital Land of the Free, where’s the revenue?  So here’s an idea. People won’t pay for most content (why should they? It’s free somewhere else isn’t it?) But they will pay for some content.

Our hypothesis is that there is a market for content that is original, timely, novel, exclusive, unique or has quality and authority… that is relevant to me, the individual. With that in mind, Duncan and I present a model underpinned by a media broker, where content is priced according to its relevance.

(Slides best viewed on full screen so you can actually read the commentary at the bottom of the page!)