When Autotrader developed their cool and innovative iPhone app, they presumedly never paused to think what the DVLA would think.

Let’s say you are waiting at the traffic lights and you see a car you like and you think to yourself ‘I’d like one of those’ With the Autrotrader app all you need do was take a photo of the reg plate.  From that, details of the make and model would appear and similar cars for sale close to you your current proximity would be displayed.  Sadly, this functionality has been canned.  Autotrader say:

The DVLA has requested that Auto Trader remove the image recognition element of the iPhone application. Although the app in no way infringes data privacy regulations, the ‘snap’ function conflicts with the DVLA’s code of ethics, as it allows consumers to capture images of vehicle license plates.

This is the same government agency with ethics that enables it to sell drivers details.  That’s an aside.  Perhaps the DVLA’s  is more concerned with avoiding the trouble they got over Castrol using number plate recognition for interactive advertising.

With localisation being championed as one of the hottest topics of 2010 combined with the ubiquitous use of camera phones, it is clear that technology and the opportunities that it brings are moving at a faster pace than the ‘public opinion’ (read Daily Mail Opinion) that the DVLC is clearly running scared of.
So what?

So when you are envisioning and playing innovation games, have a session where you play devils advocate and tease out what angry from Tunbridge wells would think.  Kill your idea as many ways as you can.  Can you identify risks you’d otherwise missed (such as DVLA’s dinosaur thinking), or does it uncover new ideas or alternative ways of doing things (to bring out a cheesy quote from Benjamin Franklin “out of adversity comes opportunity”).  There is of course always another alternative,  to leave the innovation to others, for others to face the wrath of Government quangos and follow fast.  But that is a blog post for another time.

We get confused when building applications; the technology should be incidental to delivering the experience, it should be the means rather than the end. Sadly both IT and marketeers usually don’t see it this way.

I was recently working with a telco who were running a campaign for a single application that sits on a Symbian phone and gives the user access to all their mobile services (rather than having to access them individually via the mobile web). This is not unusual, organisations marketing the technology rather than the benefit or the experience. The technology should be incidental to what you are selling.

“What most people want on their mobiles is not the applications, but the stuff they animate.

People only accept the concept of applications (whether a native app or a Web app) because that’s all they’ve been offered, and it’s largely good enough. But no-one actually wants to download and launch and register and log in to a local find-your-friends application – they just want to find their friends in the area – now! And they shouldn’t then have to flip between the find-your-friends map owned by that application and the restaurant review map owned by another.

They don’t want Facebook videos and YouTube videos and phone videos. They just want to share videos. They shouldn’t have to think about whether to send a picture by MMS or to use an upload app, after remembering the login. They don’t want multiple ways of sending messages: IM, SMS, Twitter, Facebook, etc. They shouldn’t have to think about how to tell their friends about some news item – whether to post a TinyURL link on Twitter or copy the text manually into Facebook.

They only want one shared calendar, not the phone calendar and a Google calendar and events on Upcoming.org, that need two more logins. They shouldn’t have to think about how to synchronise music or contacts lists on the phone, the iPod, the PC, some memory card and online. “

He goes on to introduce the ‘U-Web’ Mobile 2.0 platform. This is exciting stuff and well worth a read. The challenge is not just about the IT industry getting excited about U-Web, the drive needs to also come from marketeers focussing upon “what” experience they want the customer to enjoy rather than “how” it will be delivered. They shouldn’t be distracted by the application that the experience will be delivered through, they should focus on delighting the customer and driving value to the organisation.

Musical call tones when you are waiting to be connected to the person you are calling are great from a marketing and technical point of view, but they are inconsistent with (many) user expectations.  Does this mean they are wrong? Is there a cultural or demographic dimension to this?

I have a mental model for the way that phones work.  I dial a number and get a mechanical ‘brrrr-brrrr’ tone.  In some countries it is a simple sine wave tone, but it is a recognisable feedback mechanism that lets me know that the call is waiting for the person (or machine) at the other end of the line to answer it.  If I get a single tone it means the line is engaged or can’t be connected.

I’ve another mental model about music being played to me on the phone.  It means that I’ve been connected to the other person and have been put on hold.  If I have initiated the call, and it is not a free number, it is costing me to listen to the music.

In China, Hong Kong and Singapore musical call tones are becoming increasingly popular.  Instead of the mechanical brrr-brrr you get a song that the person you are calling has selected.  The first time I got this I was calling a colleague in China and I immediately put the phone down.  Was I being charged for this? I associated the music with being on hold, and I didn’t want that on an international call.  The musical call tone broke my long established mental model of how a phone works. That caused cognitive dissonance and I didn’t like that.

To my knowledge, none of the UK telco providers offer this service.  Could this be because consumers would find it hard to accept it?  If so, why is it so popular in China?  Ubiquitous phone ownership is relatively new in China, could it be true that they don’t have such an ingrained mental model of what a waiting call tone should sound like?  Or is it (more likely) an age thing.  I’m just too too conditioned with my ‘brrr-brrr’ and youth the world over will cast it away in favour of whatever is top of the download chart. (Eeugch, I’m sounding old!).

Imagine the Vodaphone shop on the high-street is open for business, the phones are on display but there are no sales staff around. You wait a few minutes, call out (thinking there might be someone “out back”) but nothing. Nobody there. It’s the same thing everyday, the shop is open for business but no-one to help you buy. Or maybe there is a sales person, but anytime you ask them about the hot product you want, the iPhone, they respond to you with nonsensical gibberish. It’s hard to imagine the high-street outlet doing this, but on the web this kind of thing is still sadly common place. Take a look at Donna M’s recent rant. Because it is a website (probably within the constraints of some dated CMS), a shoddy experience is permissible.

Recently I was told of a Blue Chip company whose IT organisation, in the guise of cost cutting, has recently disbanded its QA function. From now on, testing will be conducted by the developers themselves. Since when have developers relished the role of testing? It is inevitable that this cost cutting solution will end up costing the organisation more than it saves.

At the end of last summer I was working with a bank on their on-line retail banking strategy. During a workshop with representatives from their mortgage business they made it clear that they saw the biggest sector for growth in 2008 was the buy-to-let market. I left the workshop shaking my head, were they not reading the same newspapers I was? Even then I didn’t need a crystal ball to tell them that they were putting their eggs into the wrong basket.

Clearing out old paperwork, I came across a document describing the technology strategy for a blue chip organisation that I’d worked with in the past.

There is a guiding principle that is being applied to product technology selection that says we do not follow a ‘best-of-breed’ approach, but rather select a major technology leader (IBM) and ride their product development cycle. This means we explicitly seek and accept the “80% solution” rather than trying to optimise for each and every possible requirement. [We are] emphatic on this point. What this means in practice is that, following the selection of IBM WebSphere Application Server… add-on functionality should be sought from the IBM WebSphere family of products first. Shortcomings will be made explicit in order that we can escalate with IBM, and influence their product strategy.

No rationale was given for their preference for going with a single vendor rather than a best of breed solution, but talk to developers who have used best of breed products and the above mentioned vendor product and they will almost certainly come down on the side of the “best of breed” (that is why they are best).

During the dot-com boom I worked with bank who were developing a WAP mobile banking platform. Trouble was it could only be accessed via a Nokia 7110 (the first mobile phone with a WAP browser), the experience sucked – “Worthless Application Protocol” and the market penetration was never going to reach beyond the most hard-core (and GUI-patient) of early adopters.

At the time the same bank was intent on closing as many branches as possible – branch banking was considered unprofitable; on-line was the way forward… yet several years later I was back in the same bank helping them with their in-branch customer experience.

We all must have examples of times when we have shaken our heads and asked of others do they really know what do are doing? Whose interests are their decisions in aid of? You may not be able to do anything proactive about it at the time, but the question is, what can you learn from these encounters and how can you use them to teach others in the future.

I recently borrowed a motorola flip phone. The first non-Nokia I’ve ever used. I really liked it, once I’d worked out how to switch it on. How intuitive is it to switch the phone on using the red off button? How hard would it to have built the green button to have a call to action for on? 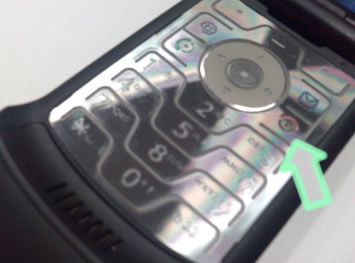