Talking about workshop icebreakers with Prashant and here’s an idea: participants write their own tombstone or obituary. “Here lies Jack. A life spent comparing numbers on an excel spreadsheet”…. You could even use Tombstone Generator to bring them to life: 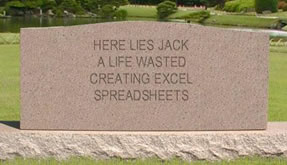 Hmmmm, maybe not the strongest icebreaker (indeed it could kill your workshop before you’ve even started… If you don’t consider cultural sensitivities you could receive some rather blank looks, if your audience doesn’t have a dry sense of humour or doesn’t “get it” you’ll be in trouble…)

So maybe it won’t work so well with people, but how about systems? If you are looking to understand the current system landscape, why not ask the participants in your workshop to list out all the systems they can think of and ask them to write the inscriptions that would appear on the tombstone.

She will not be missed

Father of Every Conceivable Problem

A real handful to manage but usually got there in the end
Local resident of Sarah’s Desktop, he never got out much
Prone to occasional lapses of judgement that were rumoured to cost the bank millions

He has gone to a better place (recycle bin)

And why restrict this to the current state. It could be a useful exercise in understanding what benefits a new system could be remembered for…

Saviour of the Back Office

Banished reconciliation breaks to history
Defeated the multi-headed Legacy Dragon, bringing peace and harmony to the Ops team
A single voice of truth
Beautiful to look at, easy to get on with, she gave such joy to customers and added such value to the business

Without her Ops can no longer function

A colleague did Luke Hohnann’ s speedboat exercise last night.  The way she drew it looked a little different to the way I draw it.

Picture a speed boat.  Now attach some anchors that are holding it back.  Which direction is the boat heading?

The boat is on the left, (travelling from right to left) and the anchor is on the right?

You are right handed.  For us special people, the left handed amoungst us, we draw the boat on the right and the anchort on the left.  That’s because we think quicker and better at performing complicated jobs.

For a while I’ve been buzzing about Luke Hohmann’s innovation games and am looking forward to his new book coming out. Using games, stories and pictures is a great way to get people engaged in workshops and get to the crux of problems. One problem you often get with people sitting around a table is a small number of vocal people contribute loudly, leaving timid bystanders with good stuff to contribute afraid to get involved. Obviously a good facilitator will look to overcome this, but get people in pairs, give them blank cardboard boxes and coloured pens and ask them to produce the packaging for the product they want to develop and you’ve got a great levelller.

These exercises do take time and can really only be done one at a time. In an attempt to fuse together the “product in a box” identifying customer needs and “speedboat” which identifes the anchors that are holding the project back, I’ve used the analogy of a hot air ballon a couple of times to some success. You draw a huge hot air balloon on the wall with ropes teathering it to the ground. You then get participants to put the features that they’d like to see advertised on the balloon. Participants write these down on post-it notes and they are stuck on the balloon. Clearly if all these features were all written across the balloon they would not all fit if sized so they could be read when the balloon flies in the sky. So just like in Formula One where a logo on side of the car will be larger (and more valuable) than the advertisment on the back of the drivers helmet, you then identify those features that must be visible from the ground (high priority) and those that may only be seen on the ground (low priority). That’s the first part of the exercise. The second part is to get participants (again using the post-it notes) to imagine the ropes are project constraints that will stop the baloon flying. In the space of 40 minutes if all goes well you will have driven out the top-of-mind features the participants want the project to deliver (and priortised them) and identifed the top-of-mind risks and issues that particiapants have. And most importantly you should have everybody engaged; with any luck a bit of laughter will be heard on the way. And that can’t be a bad thing in a corporate meeting room.