News this week was that Ivy Bean died aged 104.  A good innings, but there is more to the story than that, Ivy got on Facebook aged 102 and was a regular twitterer with more than 62,ooo followers.  One of my colleagues at work announced as he got off the phone with his mother that she had just upgraded the ram in her computer, herself.  My father has just got an iPhone and is hooked on apps.  Maybe they are late to the game, but the over 65s represent the fastest growth in take up of digital technologies.  Whilst mobile ownership for the 25-44 year olds remained static (saturated) between 2007-9, for the 65+ it grew by 17% (source: Ofcom Communication report 2009).  And internet adoption grew by 11%.  The 2007 Ofcom report found that the 65+ spend 42 hours a month online, four hours more than the most active users who are aged between 18 and 24,

It’s an old finding but the Henley Centre reported that the over 65s most felt part of a virtual community thanks to the internet; with the growth of Facebook that statistic is probably out of date, but still worth reflecting on. 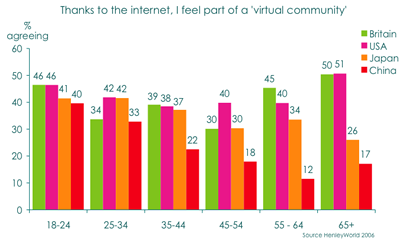 The ‘silver surfers’ are not the techno-fearing, techno-illiterate luddites you may percieve them to be.  They are a segment of the market that cannot be ignored, and an opportunity that are craving to be served.  Do they figure in your plans? Do you have any personas for the over 65s? Have you tested your propositions with this demographic?  Is your design optimised for the 18-34 demographic who have less disposable income that the older demographic who have a greater propensity to spend?

I’m not sure where this quote is from so I can’t credit it, but it is worth reflecting on:  “The wealthiest generation in the history (and possibly the future) of the earth are in the process retiring. And they don’t intend to do it quietly”.